When I previously did some updates to the Java Installers for Apache Maven, I noticed that, when I was testing the two versions, it often didn’t update the Environment variables.

At first, I put it down to the fact that the variables for one version where there and maybe they get in the way of the versions for the next. I checked to see if there was a way to force it to override the values and was initially puzzled by the information – until I realised that this is actually a common problem.

It seems that a WiX installer will happily update the environment variables – but that nothing else knows it’s been done until you tell them. You can tell them in any of several ways, including:

Having verified the problem using the 2nd approach (much less trouble than the first) I set out to add the third method to the WiX Installers.

So, I needed to add a Custom Action to the WiX projects and that necessitated writing in a Programming Language instead of XML. I’m using Visual Studio 2012 with the Votive (WiX development) plugin and that offers several project templates for writing Custom Actions.

Remember, the code is all in GitHub (https://github.com/Kajabity/Setup.Projects) and you can download the latest version of the installers on the Java Installers page.

Whilst I used to be quite handy with C++, I’ve been a Java and C# softie for a few years and more recently that has been confined to my hobby time. So initially I tried to write a C# custom action.

Right click (context menu) on the Solution in the Solution Explorer in Visual Studio and select Add->New Project… The example below shows the C++ Custom Action Project selected – but I did try the C# version first. 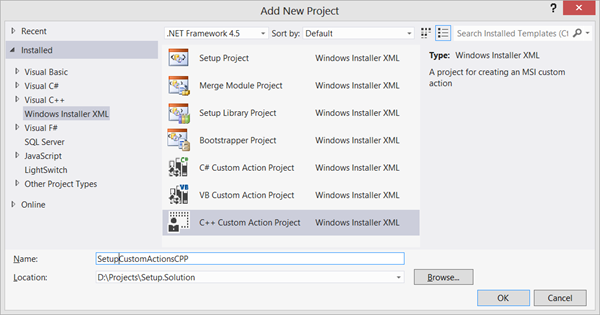 The C# approach proved problematic – first having to hook in a Windows API call that wasn’t covered in the .NET libraries (necessitating lots of messy definitions), and then finding that for some reason it didn’t appear to work anyway.

The final blow came when I read one article pointing out that using C# in WiX requires that you link in the .NET framework and thus create much larger MSI files (not sure of the validity or details, but it had the desired effect).

Faced with a long list of problems and disappointments, I bit the bullet and created myself a new C++ Custom Action project. The template handled most of the work – although I had a few issues because the version of Votive was for an older (2010) version of Visual Studio and I had to identify and fix a few path issues to the various headers and libs.

All that remained was to rename the sample CustomAction method to RefreshEnvironmentVariables and add the highlighted code, below:

Having written and compiled (successfully, of course) the Custom Action it then needs to be added as a project dependency to both WiX projects.

Finally, it needs to be added to the WiX code using the following lines:

On final change was to replace the “%M2%” value being added to the PATH variable with the actual directory path ("[INSTALLDIR]bin") just as used to define M2. This was because, when I checked the variables created after the above changes, it had failed to expand the variable – meaning that Maven was not on the path.

These changes appear to have worked – though while testing it I had the remaining problem of it being ignored occasionally. In other words, it worked some times, but not others.

Does Windows get bored?