On my current project I spend a lot of time reverse engineering legacy applications to discover business rules and design information for the rest of the team.  More often than not I end up pasting some off the results into a Microsoft Word document or an email (for which I use the Word editor option).  Unfortunately, this often results in some quite painful formatting issues as the formatting from the IDE I’m using (Eclipse) gets transferred to the Word document – often with the key selected area formatted as almost Black on Black.

I usually get around it by either pasting into Notepad first then re-cutting and pasting it into Word – or by just clearing the formatting afterwards.  Both of these get quite irritating after a while.

After putting up with it for months I finally decided to do something about it – so I Googled it and found a much needed solution on the Microsoft website at http://office.microsoft.com/en-gb/help/HA010429611033.aspx.

Wonderful.  And you can still paste the formatted text using the context menu or menu bar (which is still much less fiddly than using the Paste Special for text).

However, after a while I moved on to pasting screenshots and diagrams from Enterprise Architect – and I began to see the following error every time I tried to paste an image: – 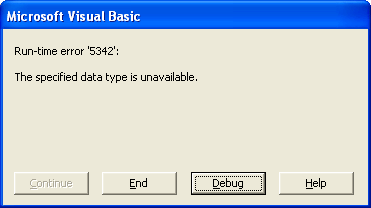 This was almost as annoying as the original problem and I nearly removed the macro.  Still, using the context menu Paste it works OK and the images went in.

Finally, last night I decided enough was enough.  All I needed was a way to catch the error and use the standard Paste action if no text is available to paste.  As I’ve almost no knowledge of VBA programming I needed some help and after about half an hour of Googling (it’s remarkably hard to find information on VBA Error handling) I came across a couple of articles that helped: –

So I now have modified version of the macro on my own PC which doesn’t throw up the errors if you try to paste a picture.  Instead, it attempts to paste the unformatted text and if an error occurs it uses the normal paste action – so pictures get pasted straight away with no hassle.  Here is the full subroutine (follow the instructions on the Microsoft article for how to enter it): –

One comment on “Paste Unformatted Text in Microsoft Word – Without Errors!”